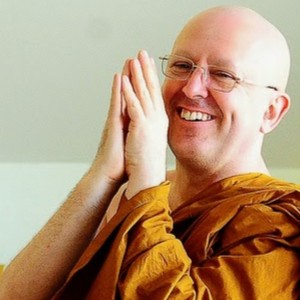 Ajahn Brahmavamso Mahathera (Ajahn Brahm) was born Peter Betts in London, England, on 7th August 1951. He considered himself a Buddhist at the age of 16. He came from a working-class background but won a scholarship to study Theoretical Physics at Cambridge University in the late 1960's. After graduating from Cambridge he taught in a school for one year before travelling to Thailand to train as a monk with Ajahn Chah Bodhinyana Mahathera.

Whilst still in his years as a junior monk, he was asked to undertake the compilation of an English-language guide to the Buddhist monastic code (the Vinaya), which later became the basis for monastic discipline in many Theravada monasteries in Western countries.

After practising for nine years as a monk in Thailand, he was sent to Perth by Ajahn Chah in 1983, in response to an invitation from the Buddhist Society of Western Australia, to assist Ajahn Jagaro in teaching duties. Initially they lived in an old house in the suburbs of Northern Perth and in late 1983 purchased 97 acres of rural forested land in the hills of Serpentine, south of Perth. This land was to become Bodhinyana Monastery- the first dedicated Theravada Buddhist monastery in the Southern Hemisphere.

Initially there were no buildings on the land, and little funding, so the monks themselves began building. Ajahn Brahm learnt plumbing and brick-laying and built many of the current buildings, including the meditation hall, himself.

In 1994, Ajahn Jagaro took sabbatical leave from Western Australia and disrobed a year later, abruptly leaving Ajahn Brahm in charge.  Ajahn Brahm took on the role with gusto and was soon being invited to provide his profound, uplifting and humorous teachings in other parts of Australia and South-East Asia. In October 2004, Ajahn Brahm was awarded the John Curtin Medal for his vision, leadership and service to the Australian community by Curtin University, and has convened at many Global Buddhist Conferences (the most recent one in Perth, 2015).

In English
Wisdom and Wonders
Opening Up to Kindfulness
The Basic Method of Meditation
All You Need Is Kindfulness PDF
Mindfulness, Bliss and Beyond (Chapters 1-4 only) PDF
Simply This Moment
Good Governance PDF
Wisdom of Silence
Stepping Towards Enlightenment PDF

Vegetarianism
Various Articles on Tricycle
Happiness, Expectations, and Learning to be Losers
The Anukhampa Bhikkhunī Project
Banning Ajahn Brahm’s speech on nuns was a spectacular own-goal