I have a close friend who tells me she receives messages from God. What she describes sounds like nimittas—bright lights and immense happiness. She says she sees formations in the clouds and that she dances with the angels. It’s all experienced in the mind. Does this mean that Christians can experience nimittas and jhāna, and that one day she can become enlightened, too? 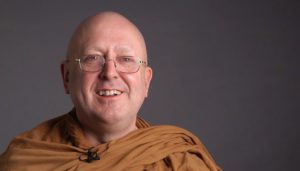 It could be. You need a bit more information to find out what’s actually happening and whether it’s a nimitta, but it could be pretty close. And it depends on the messages she receives, because sometimes it could be schizophrenia. You’ve got to be very careful in interpreting these things. If the messages make sense, then it’s probably OK.

He froze. This was weird.

Listening very carefully, he looked around the room. “What did you say?” he ventured.

Wow! The voice was clear this time. And so he thought to himself, “Why not? Maybe someone is looking after me.”

He definitely wasn’t imagining this. It was as clear as if someone was saying it aloud.

That wasn’t much to lose, so he got some chips for 10 bucks and put them on 17. The croupier sent the ball rolling, and it stopped at… 17!

Since they were all winnings, he put them all on 22. The croupier sent the ball rolling again and, of course, it stopped at 22.

By this time, a large crowd had started to gather, and the vibe was electric. The croupier sent the ball rolling once more, and as it span a hush fell over the room, as if the entire casino went silent.

Round and round the ball went, the only sound was that of the ball rolling… until finally… edging closer to the slot… (This was a close one!)… It stopped… on 16!

A few punters screamed, breaking the silence, but the rest held each other tight, because they could see the ball hadn’t yet stopped. It toppled on the edge of the slot.

Time seemed to slow down, as the ball balanced on the edge of the slot, the wheel still spinning.

But then… the ball toppled a little more, and bounced out, landing in the next spot.

The crowd was stunned.

From the silence emerged the voice once more, now crystal clear: “Oh… Shit.”

[The audience breaks into laughter.]

So even heavenly beings make mistakes.